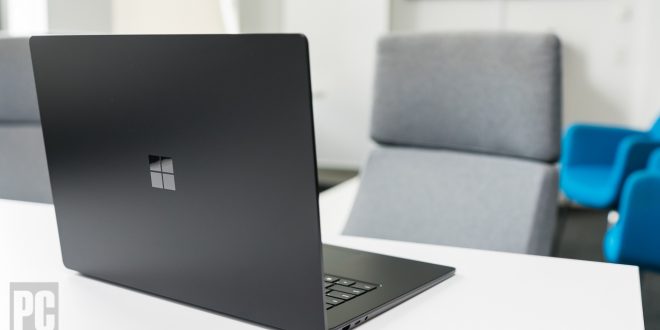 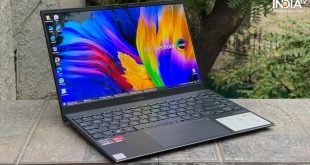 The Microsoft Surface Laptop 4 is a nice laptop, but it feels generic in comparison to its competitors, with the only significant improvement over the Surface Laptop 3 being a faster processor. With its thick bezel and absence of a fingerprint reader, it has an antiquated appearance. Despite these flaws, it still provides decent value for the money. Let’s follow us to find out the laptop surface 4 review in this post!

We chose the Platinum color choice out of the four available colors. It is lovely. The Platinum Surface Laptop 4’s lid is, well, platinum in color, and the only marking on it is a chrome square bearing the Microsoft brand. While the laptop’s bottom has a similar appearance, the keyboard tray has a significantly darker hue.

The laptop is easy to transport in your luggage when commuting because it is only 0.57 inches thick and 2.79 pounds (1.3 kg) in weight. The Surface Laptop 4 feels remarkably sturdy while being so tiny.

The lid is composed of aluminum and has no flexibility whatsoever. And unlike many other touchscreen laptops available today, the hinge is so sturdy that when you poke the screen, you don’t need to readjust it afterward or brace it with your other hand. By itself, this makes using the touchscreen much more practical and makes it seem less like a gimmick. Other laptop manufacturers may absolutely take note of this.

However, despite the laptop’s sturdy top, comfort is the main focus of the keyboard deck. The keyboard and trackpad are encircled by a beautiful, velvety Alcantara material (it’s a suede-like microfibre pile), as is now customary with the Surface Laptop. Because it is lovely and soft instead of this hard metal like you get with other comparable laptops, typing is considerably more comfortable right away.

The 2256 x 1504 resolution of the 13-inch Microsoft Surface Laptop 4 I have for review essentially implies that it has a sharper display than the more standard Full HD that most laptops sport. Despite having a larger screen, the 15-inch model should have the same sharpness thanks to its similar 201 PPI (pixels per inch). Because Microsoft chose a 3:2 aspect ratio, the screen is larger and more square-shaped than on earlier laptops. This laptop trend is becoming more and more common because it provides additional vertical room for things like websites and social networking.

The Surface Laptop 4 is a fantastic option if you want a laptop for watching a lot of video, especially when compared to the compact Surface Laptop Go. This is supported by outstanding benchmark scores, with the Surface Laptop scoring an amazing 394-nit brightness, which is far higher than the industry standard. The contrast of 1373:1 is also good. Although there are competing laptops that perform better, this is still readily high enough to produce vibrant colors in both photographs and videos.

For artists who value accurate color reproduction, the Surface Laptop 4 is not a wise choice. It covers 91.3% of the sRGB gamut but falls short of DCI-P3 or Adobe RGB’s 65% threshold. Therefore, it might be wise to go elsewhere if you’re working with color-sensitive activities using photographs and videos.

Both AMD and Intel processors are available for the Surface Laptop 4. Unfortunately, I was unable to test the AMD version, which comprises the entry-level Ryzen 4000 processor variants. Microsoft provided me with a review sample of an i5 chip from the 11th generation, while there is also an i7 CPU available.

The Surface Laptop 4’s new processor options are, by far, the largest improvements over its predecessor. The new CPU assures quicker speeds compared to the Outer Laptop 3 and is competitive with the Dell XPS 13 according to several benchmark tests I did on the laptop, but the MacBook Air still leads by a comfortable margin thanks to the Apple M1 chip.

The Surface Laptop 4’s enhanced processing options are its most notable features, but in my opinion, the battery efficiency increases outweigh the performance gains. The Surface Laptop 4 ran for 10 hours and 54 minutes before shutting down after lowering the brightness to 150 nits and using the PCMark 10 Office simulation. Although that’s a decent result, it still falls short of devices like the Acer Swift 5 and Lenovo Yoga Slim 7, which often last for approximately 15 hours.

The finest feature of any Surface gadget, including the Surface Laptop 4, is that Windows 10 comes pre-installed with no issues. Because there is no sign of bloatware, the laptop boots up quickly every time, saving you the time it would take to disable starting apps or uninstall add-ons during your first hour of use. In all honesty, that virtually justifies us in recommending this laptop in the first place.

Although the Surface Laptop 4 is a fine laptop, it doesn’t really offer anything that is superior to the alternatives. Although the upgrading to the newest Intel processors has made it fast enough to compete with the Dell XPS 13, Microsoft’s refusal to give it an update has left it appearing dated. If casual gaming isn’t important to you, I’d personally suggest the cheaper Surface Laptop 3.

Previous The Top Things to Do and See at Fort William, Ben Nevis
Next Asus Zenbook 13 OLED review: Tiny laptop, tons of power The Intel powered MacBook Air (2020) improves upon its predecessor, the MacBook Air 2019, quite …