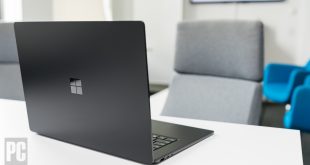 The Intel powered MacBook Air (2020) improves upon its predecessor, the MacBook Air 2019, quite a bit. The 2020 model offers newer internals and better minimum storage configurations than older models. It now comes with double the storage space compared to before. Add in the better performance from upgraded components to Apple’s slimmest line and you have a much better deal for the Air’s target audience.
Apple’s most portable series has been underwhelming for some time now, at least considering its price. Plenty of Windows competitors fit into the same price range but with more impressive specs, giving the Air a run for its money. Add to that, each year’s refresh has been a relatively minor update. It’s no wonder that users want more from their Airs. The MacBook Air (2020) finally steps up. You can now get quad core processors and up to 16GB of RAM without too much of a price hike or losing that thin design that makes the Air so special. Let’s exploce Review MacBook Air 2020 below.

There’s no radical redesign of the MacBook Air with the 2020 model (on the outside, at least), but then many people will argue that there’s no need for Apple to tinker with such a successful design. So, the MacBook Air remains impressively thin and light, as the name suggests, with dimensions of 11.97 x 8.36 x 0.63 inches (30.41 x 21.24 x 1.61cm). That’s a slightly thicker build than the 2019 model, and this year’s MacBook Air 2020 also weighs slightly more at 2.8 pounds (1.29kg) (compared to the 2.75 pounds (1.25kg) weight of the 2019 model).
As is the case with modern MacBooks, the MacBook Air (2020) doesn’t come with many ports, so you’re stuck with just two Thunderbolt 3 (USB-C) ports and an audio jack. The Thunderbolt 3 ports are at least versatile, offering transfer speeds up to 40Gb/s and allowing you to transmit up to 6K footage to a compatible monitor, and can be used for charging as well. So, you don’t need a special charger to boost the battery of the MacBook Air, which is nice, but it does mean you lose one of those Thunderbolt 3 ports when you need to charge. Holding the MacBook Air is what you’d expect from Apple’s lightest laptop it feels, unsurprisingly, lightweight. While it doesn’t match the ultra-light designs of the LG Gram or the Acer Swift 7, it’s still easy to carry around with you and sling in a bag, and it continues to feature the same premium brushed finish that’s adorned MacBooks for years, with a choice of Space Gray, Gold or Silver colors. We’ve been using the base model of the MacBook Air probably the version many people will go for which means the dual core Intel i3 chipset at the heart. We’ve found early performance to be pretty impressive even when loading up the RAM hungry Chrome, filling it with 25 tabs and then trying to edit photos on the side. This is once of Review MacBook Air 2020.
We noticed very little in slowdown at all in terms of switching between tasks – even when adding in a video call (which did begin to hammer the battery through Chrome, as it does on many MacBooks) things continued well, albeit with some necessary fan assistance to keep things cool. While macOS feels nicely responsive for day to day tasks on the entry level version, the MacBook Air still lags behind the more powerful (and expensive) MacBook Pro when it comes to using more intensive apps. While this is certainly not a slow laptop, you may find yourself staring at the spinning wheel icon as the MacBook Air loads up apps a bit more often than on faster Macs. Best college laptops in 2021 for students

If you’re a student, you’ll want one of the best college laptops so you can …