Vietnam is a country covered in rolling hills, cloud-cresting peaks, and majestic Karst limestone mountains. During a motorcycle adventure, you’re going to cross at least one of these incredible mountain passes. Hai Van Pass is one of the more popular tourist attractions with its close proximity to two major cities.
But , some of these stunning passes hide deep in the northern regions near the border with China, and others rest in the Central Highlands where the pass used to mark the divide between kingdoms. Let’s exploce The Scenic Mountain Passes in Vietnam below.

Located around 17km from Sapa Town, O Quy Ho (or Tram Ton) is the longest pass in Vietnam. It is about 50km stretching on Highway 4D, across Hoang Lien Son mountain range and connecting 2 provinces of Lao Cai and Lai Chau. The pass winds through the sky-high cliff and deep chasms at an altitude of nearly 2000m, making it more dangerous. But thanks to its height, length and danger, O Quy Ho Pass attract a lot of adventure seekers who come here on motorbikes.
Overcome the fear and climb to the peak of O Quy Ho Pass, also called Haven’s Gate, visitors will have a chance to see floating clouds and admire the spectacular panoramic views of Fansipan mount the highest peak of Indochina mountains and the picturesque valleys of Lai Chau. On the way to O Quy Ho Pass from Sapa, another attraction of the area that you should not miss is the Silver Waterfall which is close to Hoang Lien National Park. The name “Ma Pi Leng” in H’mong language means “the bridge of a horse’s nose” that describes its shape. Sit within Dong Van Karst Plateau Geopark in Ha Giang Province, it is seen as one of the most hazardous mountain passes in Vietnam. The pass is about 20km long and over 1,200m above sea level, connecting 2 towns of Dong Van and Meo Vac.
Ma Pi Leng Pass, like a thread, crosses the middle of the hills, creating a majestic setting for the rocky plateau. Riding a motorbike to the peak of Ma Pi Leng Pass offers you stunning landscapes of limestone mountains, green forest, blue sky and romantic Nho Que River turquoise green all year round. It is reason why Ma Pi Leng is a notorious place for many adventurers and enthusiastic photographers also. 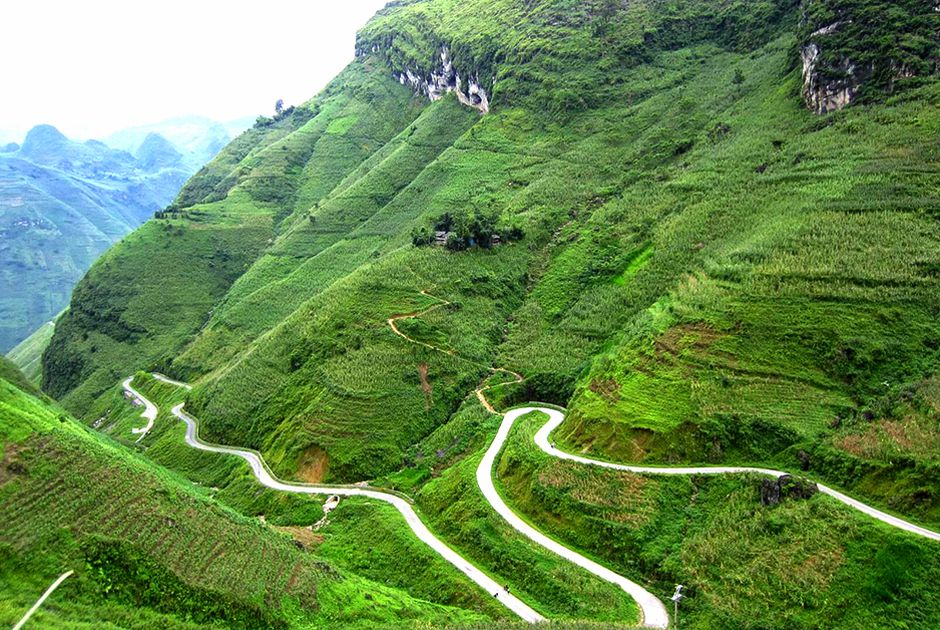 A member of the four famous passes in northern Vietnam, this narrow road on highway 6 zig zags its way between Son La and Lai Chau provinces. A contrast of two worlds, the road has been blessed with beauty and riddled with risk. Pha Din Pass rises up to an altitude of 1,648m above sea level, via the small old road with lush green terrain and rough cliff faces that drop off into the valley. While riding this 32km route, you’ll pass scattered villages at the bottom and likely pass through the clouds as you ride the top. This cloud coverage adds to the ambiance and the danger, adrenaline junkies rejoice.
Once a prominent shipping route for supplies like ammunition and food during the war with the French in 1954. This area was heavily bombed, killing over 8,000 of the nation’s youth that was fighting back against the French. Near the top of the pass, you can see the war memorial dedicated to leader Dien Bien Phu and these brave Vietnamese fighters. The name Pha Din when translated from a Thai dialect means “Heaven and Earth”, and when you ride your motorbike through here, it feels like your touching the blue sky while riding over the rolling mountains. It won’t take you long to figure out why they picked the name. Khau Pha Pass in Yen Bai Province is about 30km long and 1,200m high. There are several dozen paragraphs folding sleeve. Especially, the pass is more dangerous on foggy days because of no barrier or any warning signs. Its elevation and surrounding scenery add up to the perfect spot for air riding adventure seekers, and now this is one of the top paragliding destinations in Vietnam.
Passing through the pass, you have chance to visit other famous here such as Mu Cang Chai, Tu Le, La Pan Tan, Che Cu Nha. The best time to admire the breathtaking view of the place is from September to October when the rice turns to yellow and ready to harvest, which makes an lovely setting. Khau Pha, along with Ma Pi Leng, O Quy Ho and Pha Din are considered as four greatest passes in Northern Vietnam.

Previous Top Things to do in Danang, Vietnam
Next Top Vietnam villages you should visit